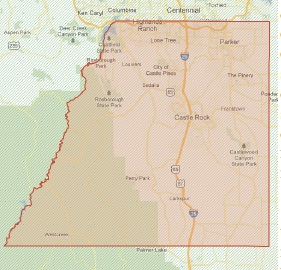 When 36 women, inspired by Sherry Hitztaler and encouraged by the Colorado Springs AAUW branch, got together to form the Douglas County Branch of AAUW in 1977, the area from Denver south to Colorado Springs was known chiefly as a scenic drive along the “Valley Highway” (now I-25) passing through the little town of Castle Rock. The fledgling branch hoped to draw members from all of Douglas County’s population of 15,700. Today, Douglas County has become one of the fastest growing counties in the United States and, in 2000, had the highest median income of any county in the United States. It is the site of the new communities of Lone Tree, Castle Pines North and Highlands Ranch. Castle Rock, the county seat, has exploded to 50,000 in 2012 from 1500 in 1970. It’s not surprising that Douglas County’s AAUW branch won awards for membership growth.

This area, the geographic center of Colorado, was once hunting grounds for the 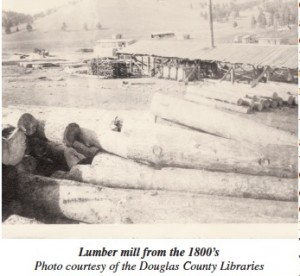 Arapaho and Cheyenne until the 1858 William Green Russell party from Auraria, Georgia’s gold fields, found some “color” or flakes of gold in the stream at the headwaters of Cherry Creek and staked their claims at the site of “Russellville” (east of present day Castle Rock), sometimes called the birthplace of Colorado. The Russell party continued on west to Denver and the mountains. News of their find triggered the Pikes Peak Gold Rush. Two of the three major trails to the gold country ran through Douglas County.

By the time Colorado became a territory in 1861, the California Hotel and stage station four miles north of Russellville, had become the home of James Frank Gardner, the “father of Douglas County” and the founder of “Frankstown”. It became the county seat for the area which stretched from the South Platte River on the west to the Kansas border on the east. When Colorado territory became a state in 1876, its eastern half was taken away to became Elbert County and a hotly contested election moved the center of Douglas County government to Castle Rock. 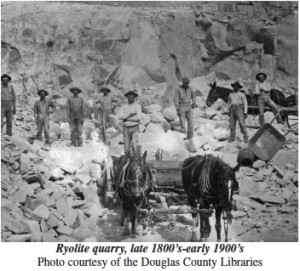 Grains (hay, wheat, corn, alfalfa) and dairy farms, shorthorn cattle ranches on the eastern plains, and lumbering in the western foothills, became the economic basis of Douglas County, although there was a minor “gold rush” along the South Platte River on the county’s western border around 1900. Douglas County lumber mills helped build Denver as did the lightweight volcanic “lava rock” or rhyolite, mined in quarries around Castle Rock.

The markets for Douglas County’s cheese and cream, building stone and lumber were expanded beyond Denver and Colorado Springs when the D& RG railroad was built in 1871 along East Plum Creek. The Denver & New Orleans line connected Denver to Pueblo through Parker in 1882. Fruit orchards flourished along Cherry Creek after the Castlewood Canyon Dam was built in 1890. Its collapse in 1897 sent a wall of water racing towards Denver and wiping out the fruit industry. (The continuing flood danger would lead to the building of Cherry Creek Dam in 1950.) Meanwhile, water from the South Platte River on the county’s western border was transported to Denver by the City Ditch in 1865 and later by the 84 mile long Highline Canal. Cheeseman Dam was built at the mouth of Goose Creek and the South Platte River to supply drinking water for the city. At the start of the 20th century the du Pont de Nemours Company of Delaware established its company town of Louviers along West Plum Creek to manufacture nitroglycerin and dynamite for mining and land clearance.

Wealthy landowners established impressive “spreads” such as the Diamond K ranch in 1891 – now Highlands Ranch – which by 1937 acted as host site for the Arapahoe Hunt Club (with coyotes substituting for foxes). A Tudor style castle, “Charlford”, (now Cherokee Ranch), was built by Charles Johnson,in the 1920’s, as a hunting lodge. It was later known as Cherokee Ranch and became famous for Tweet Kimball’s introduction of Santa Gertrudis cattle (a Texas Brahma longhorn-shorthorn mix) to Colorado and for her legacy. Since 1996 the Cherokee Ranch and Castle Foundation has administered the property as protected open space and public education facility.

Relatively little seemed to change in Douglas County during the first half of the 20th Century. Most of the population were descendants of the original pioneers. The newspapers of Denver called Castle Rock “a sleepy little town”. In the 1960’s , with the completion of I-25 between Denver and Colorado Springs, county shoppers traveled north or south, rather than encouraging new business growth in the county. Castle Rock citizens began a widely known annual tradition in 1936, with the lighting of a Christmas star on top of Castle Rock. The first signs of Denver’s urban sprawl into Douglas County showed up around Parker on the northeastern edge in the 1960’s. Developers’ first attempts to revitalize the town and make it grow resulted only in the destruction of over a dozen historic buildings in a move to create “a town of Western Victorian decor.” By the 1980’s, however, the citizens had incorporated the town,and a new firm had created needed water storage facilities for an expanding community of 1200 in 1984 from 285 three years earlier.

Growth spread throughout the county with Castle Rock annexing its first subdivisions in the 1960’s. The town suffered a setback to citizen morale when the cherished Douglas County Courthouse burned to the ground the night of March 11,1978, the result of a fire set by a teenage girl whose boyfriend was being held in the Courthouse basement jail.

In 1979, expansion continued in northern Douglas County as Mission Viejo purchased Highlands Ranch for development. Castle Pines Golf Course, designed by Jack Nicklaus, opened outside Castle Rock in 1980. By 1990, Douglas County was reported to have the highest percentage of new housing units in the United States! The opening of the Castle Rock Factory Shops in 1992 and Park Meadows Shopping Mall in 1996 brought increased tax revenues to a county that had once been land-rich but tax-poor with only the railroads and residences to rely on for income. (DuPont Explosives had closed in 1971.) Starting in 1976 in the southern part of the county, the Renaissance Festival brought thousands of visitors into Larkspur on June and July weekends.

Castle Rock’s and Parker’s growth through annexation of subdivisions and the establishment of new communities such as Highlands Ranch, Lone Tree and Roxborough Park, worried many county residents that Douglas County would become one solid mass of housing and strip malls. So they were cheered by the creation of the Greenland Ranch Open Space of 21,000 acres on the county’s southern border. This leaves 12 miles of rural land along the I-25 corridor between Colorado Springs and Denver. Douglas County residents, both old and new, are united in trying to keep some of the “good old days” alive while benefiting from the talents and contributions of new residents. The Douglas County Library’s History Research Center in Castle Rock, the Castle Rock Historical Society and Museum, the Sedalia, Highlands Ranch, Larkspur, and Parker Historical Societies, the Castle Rock and Douglas County Historical Preservation Boards and land-marked historical property owners are working to keep the county moving forward while honoring the past.